The regional King Conference was developed in 2017 with participants from St. Lucia, Guyana, Barbados, Jamaica and Trinidad and Tobago. It was created because we realized that the important conversations raised in the King Show needed to continue in earnest. The King Conference is a space that helps to document, develop and theorize the experiences of transgender men and masculine-presenting lesbian, bisexual and queer women, which is under-explored in the region.

This conversation is not only lacking in Trinidad and Tobago; according to our regional partners, this kind of intervention is needed across the Caribbean. In 2017 I Am One collected surveys from the participants and facilitators of the conference and the organization is currently working to produce an anthology to present emergent ideas and discussions. The King Show and the King Conference complement each other, and for the first time this year, 2019, we aim to produce both as one event. Therefore, this proposal is not solely for Trinidad and Tobago, but it is a proposal to start the conversation and advocacy for these communities on a regional level. We will be inviting past and new regional and local participants to continue the conversation at this year’s King Conference and to also perform at the Show.

The goal for 2019, is to include participants from countries in the Caribbean that have been excluded from mainstream organizing such as Belize, Haiti, St. Croix, and countries in the Eastern Caribbean. As such we are also seeking partnership with Eastern Caribbean Alliance for Diversity and Equality (ECADE) to send one representative to participate in both the King Show and the King Conference. The proposed date for the next King Conference and Show is May 27th to June 1st.

I Am One has received a small grant from FRIDA Young Feminist Fund to host the 2019 King Show, in the selection process it was voted across the region as the project with the most impact. The organization, however, has an ambitious plan of hosting the King Show and the King Conference as one event for the first time in May 2019.

Aim: To create a regional space that is by and for trans-men and masculine-presenting lesbian, bisexual and queer women which focuses on performance, research and advocacy.

Organizational Background, Expertise and the Experience of Project Leaders 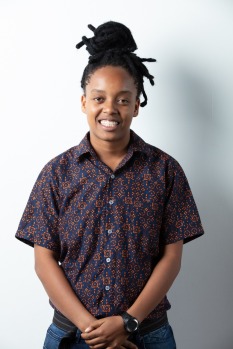 Shaun has been an advocate for sex workers and transgender people for over five years. Shaun became involved with I Am One in 2016. He worked on the Pride Arts Festival in 2016 and 2017 as an actor and artist. Shaun co-directed the local King Show in 2016 and 2017 and has facilitated session at the King Conference in 2017. He founded I Am Trans, an affiliate of I Am One in 2016 to address the social issues faced by the trans community: the violence they face, their invisibility in legal frameworks, lack of access to health services, limited educational and employment prospects.

The King Show and King Conference will be led by Zeleca Julien. Zeleca is the Director of I Am One and has been a member of the organization since it incorporated in 2014. As Chairperson, and while pursuing a Masters in Gender and Development she has worked closely with LGBTQI youth and women to create safe spaces, educational opportunities, and expressive platforms that promote the empowerment of LGBTQ people in Trinidad and Tobago and the Caribbean. She is known in I Am One for bringing new and intersectional events and activities to the LGBTQ community. And has founded projects such as the King Conference and the ‘Your Story’ research project.

I Am One is a Trinidadian NGO that uses art, culture and research as tools to connect with individuals at all levels to build community. I Am One recognizes that although all LGBTQ people may experience discrimination and stigma, some of us experience multiple levels of discrimination due to race, class, gender, physical health and disability, mental illness, age, social status, financial status, geographical location, etc. Therefore, to truly build community in our diverse country and region in a manner that leaves no one behind, I Am One has developed several national and regional projects, which includes the Trinidad and Tobago Pride Arts Festival, The King Conference, The King Show, and the ‘Your Story’ Research Project.

These initiatives directly engage with LGBTQ communities and seek to effect social and cultural change. The Pride Arts Festival provides a safe place for hundreds of people to interact, share ideas and build a sustainable community. ‘Your Story’ is key to understanding the specific needs of LGBTQI Caribbean people, to identify gaps, and to analyze issues and trends in our community. The King Show and Conference focus on transmasculinity and LBQ masculine culture, which is heavily under-researched and discussed in the Caribbean.

In Trinidad and Tobago, the LGBTQI community has been mobilizing to achieve structural and social change to end discrimination. In April 2018 the island’s buggery laws were deemed unconstitutional in a historic court case, since then NGOs, activists and citizens have been organizing to fight against lingering hate speech and fear mongering. I Am One has always understood that to truly end discrimination, policy change must be accompanied by strong social and cultural mobilization. As a response to this ideal, in 2015 I Am One founded the Trinidad and Tobago Pride Arts Festival – a month of activities to build community through art, research and cultural expressions. The Trinidad and Tobago Pride Arts Festival was among the first in the region and has grown over the years attracting hundreds of artists, activists and LGBTQIA citizens.

Our events aim to target groups within the LGBTQIA community that face heightened discrimination and marginalization. Two of these groups are comprised of transgender men and masculine-presenting lesbian, bisexual and queer women. Transgender research and funding in the region is generally funnelled towards transgender women and HIV initiatives, and projects and events in the community oftentimes attract gay men. The King Show was created in 2016 to address this gap and has been organized annually by members of I Am One. In 2017, I Am One received funding from the Inter-American Foundation to host the first King Conference for two days. This brought together a cohort of five transgender men and masculine presenting LBQ women from five NGO’s in five Caribbean countries.

The participants received training and information in advocacy, community building, health and discussions around issues faced by transgender men and masculine presenting LBQ women. In the region, members of these groups may experience and reproduce ideas about toxic masculinity, and the King Show and King Conference are opportunities to challenge these from a feminist perspective through information, performance and education.

Empowering and celebrating the diversity of LGBTQIA persons of Caribbean heritage